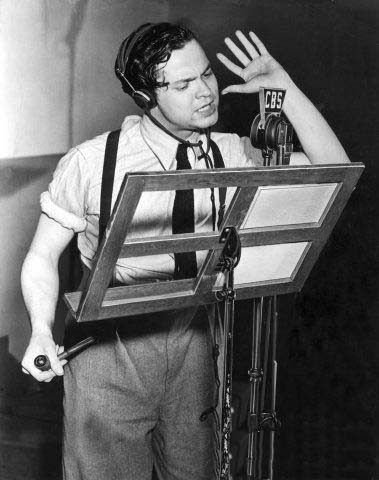 33 radio recordings of RKO's The Shadow, recorded as main character by Orson Welles between 1937 and 1938


It doesn't happen that often that a cultural icon plays a \"genre\" role, and in the 1930's it probably happened even less. But before a certain well-documented Martian Invasion rocketed him to fame and a contract with RKO, a 22 year-old Orson Welles funded his theatrical productions with radio work, including a year on the Mutual Network's now-legendary \"superhero\" radio program The Shadow.

The program, loosely adapted from the popular pulp magazine series, told the story of Lamont Cranston, a wealthy young man-about-town who used his hypnotic powers to cloud men's minds so that they could not see him, fighting crime as an Invisible Avenger known only as The Shadow.

Welles played the dual role in 1937 and 1938, first for 26 episodes for the show's long-running sponsor Blue Coal, then for a summer series sponsored by Goodrich Safety Silver-Town Tires. For many years it was believed that the syndicated \"Goodrich\" series had run for 15 episodes... until a complete collection of recordings surfaced in the estate of a former Goodrich executive and it was realized that the summer season had been a full 26 episodes - and that 11 full episodes starring Welles had been discovered that had not been heard since they originally aired 70 years ago.

which I found here

Thanks
Reviewer: Hanguard - favoritefavoritefavoritefavorite - November 19, 2013
Subject: Good for people new to otr.
Ive listened to many many episodes of the shadow. I liked it very much at first but then after a while I noticed most of the episodes were very generic to each other. Heres things that were similar in each episode. The shadow rarely saved innocent people from death. He does though at the very last minute save one person, at the end of each episode. Anyways, margo must be psycho. Cranston and her always joke in the end of an episode after a one or two deaths happened. Of course, each episode starts with them back to normal, and orson welles would want them to both be jolly so the listeners dont get bored. Another similarity that mostly always happens if margo asks him "but how do you get in" (referring to get into a building of some sort) and Cranston answered something like "As the shadow". It happens in lots of episodes which makes margo quite a stupid character. Another poorly written review by me (just wanted to explain my problems with the show) I give this show 4 stars because it had interesting characters. The plot twists were easily guessable but nevertheless its good. This is a must for otr listeners even if it has its cons.
Reviewer: justaskmike - favoritefavoritefavoritefavorite - October 26, 2013
Subject: Bret Morrison was the definite Shadow
I'll have to agree with Shadows Girl that Bret Morrison was by far the best Shadow on radio. He had that right quality for the Lamont Cranston man about town air and yet when he did the Shadow, his delivery was menancing but not theatrical or campy. If you listen to Orson Welles on his Black Mueum program, his pausing between words or lines for effect is a bit stagy.The Shadow was meant to be melodramtic and not at all classic stage drama. Grace Mathews and Gertrude Werner probably had to keep from laughing when they delivered their "plkeae spare me spelech" to the maniacal villian just before the Shadow interved. My favorite lines were the closing "The Weed of Crime Bear Bitter Fruit." This backedu up by the image of a coal furnance burning Blue Coal symbolizing the fires of hell and perdition drove home the themme of obeying the law very well to young innocent minds.
Reviewer: The Shadow 2013 - favoritefavoritefavoritefavoritefavorite - October 1, 2013
Subject: Fantastic Shadow Shows
These are all great shows. Listen to one and decide for yourself
https://www.youtube.com/watch?v=FHZG7hBec8s
Reviewer: MrsLamontCranston - favoritefavoritefavoritefavoritefavorite - April 20, 2013
Subject: "Who knows what evil lurks in the hearts of men? The Shadow knows!"
"A figure never seen, only heard, the Shadow was an invincible crime fighter. He possessed many gifts which enabled him to overcome any enemy. Besides his tremendous strength, he could defy gravity, speak any language, unravel any code, and become invisible with his famous ability to "cloud men's minds." The best OTR show ever!! Love Lamont Cranston & The Shadow himself!
Reviewer: Shadows_Girl - favoritefavoritefavorite - May 8, 2012
Subject: great program
Orson was "okay" as the Shadow. Personally I think my Uncle Bret was miles better. But there it is.

But just to clear something up: Orson did not PRODUCE any of these shows. He just played the role.
Reviewer: qrper - favoritefavoritefavoritefavoritefavorite - May 12, 2011
Subject: The Shadow is the best
...especially with Orson Welles playing the feature role. What a baratone voice for a young fellow. Love that theme music, the early version. And Blue coal, I remember my father ordering it in the late 1940's.

Thank you very much for uploading so many great eposodes.